Deepest Darkest
Old Coulsdon, United Kingdom
An acquired refugee from the days of exile at Selhurst Park, my first game being a dreary 1-1 draw with Millwall. I followed the team back to The Valley, and have now been with them for over twenty years. You will find me in the Rose of Denmark or in the Lower West. Follow me on Twitter @DeepestDarkest1 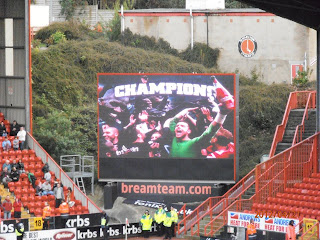 As Cameron and I wandered down the road after the celebrations yesterday, it suddenly occurred to me that in the seven years he has been accompanying me to the Valley, he has seen us relegated three times, and yesterday for the first time in his fifteen years on this planet, he has finally seen us promoted. He seemed to be coping with all the calm of a seasoned veteran. No glory boy tag for him! He's done his time, and he deserved yesterday, as did every other man jack of us, new fan or old.

The game itself was forgettable in football terms. It was all about what was unfolding both at the Valley, and at Stadium MK one hundred miles away. It turned out perfectly. I could tell you about Kermorgant's sublime free kick, and Stephen's neatly executed winner, but do you know what? I just don't care. We are the champions, and that's all that matters right now.

Photograph courtesy of Kap Varma
Posted by Deepest Darkest at 9:25 am